"A team is not a bunch of people with job titles, but a congregation of individuals, each of whom has a role which is understood by other members. Members of a team seek out certain roles and they perform most effectively in the ones that are most natural to them." Dr Meredith Belbin

After many years of research into teams and their performance, Dr Meredith Belbin discovered that the highest performing teams had nine different Team Roles present

GetSet - the Belbin Report for Young People:
A Belbin Report will identify which combination of the nine Team Role behaviors you prefer. While the standard Belbin Reports are aimed at people with experience in the workplace, the Belbin GetSet Report has been especially designed for those with little or no work experience allowing you to put the Belbin theory into practice.

Like the standard Belbin Reports, the GetSet reports contain personalised guidance and advice based on current Team Role preferences. As people completing a GetSet Report are at the start of their career journey, these Reports also contain useful information about all of the Team Roles.

GetSet is perfect for

The information contained in the GetSet Reports will allow

Specialist
Strengths: Single minded, motivated by the pursuit of knowledge Allowable Weaknesses: Contributes on a narrow front, dwells on technicalities 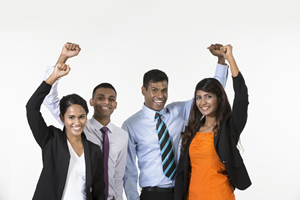